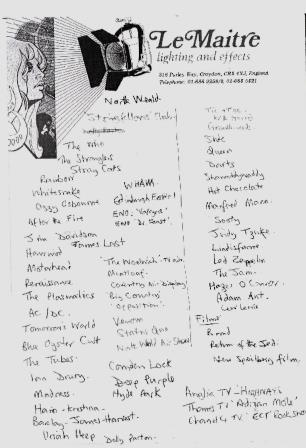 Martin Blake, one of Le Maitre's founders, was cremated yesterday at Crawley Crematorium. There were eulogies from Mick McManus, James Jose who worked with Martin in the Effects Company, and his personal secretary who helped him to function. Martin had been suffering from acute diabetes which affected his sight and mobility (he had lost part of his foot to the disease) and deafness, no doubt exacerbated from his many gigs.

The eulogies reflected Martin as we all knew him. A genius in his field, there is no doubt. Modern pyrotechnics can be traced back to Martin's invention of the Pyroflash system. He also designed the first commercially available smoke machine for the entertainment industry. He was the first to design a CO2 Jet and pioneered the use of dry ice. The Peasouper, still made today, was designed by him long before Le Maitre was thought of. The Silver Jet and many of the early products for Pyroflash had never been available prior to Martin's invention.

Martin had an engineering background but pyrotechnics were all self-taught. He seemed to have an innate understanding of what and how formulae would work.

Those not personally acquainted with Martin may have heard many accounts about him, giving the reputation of eccentric, and indeed he was! He had little time for either customers or the companies that supplied him. They all have stories to tell.

Mick and I had a long conversation about him. We both agreed that we wouldn't have wanted to miss our time with him and it is, indeed, The End of an Era.

I hope that he finally finds peace.

The image is a list of Martin's of just some of the gigs he was involved in.