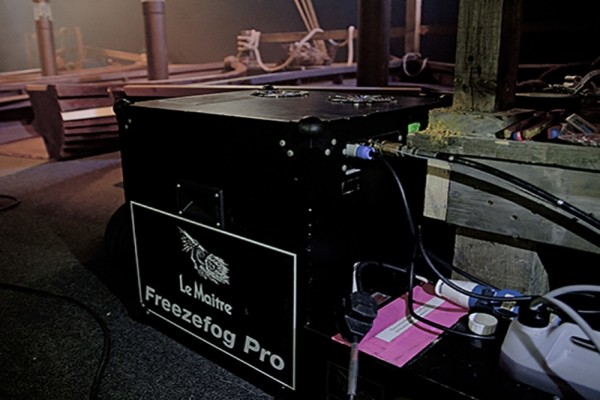 Le Maitre is delighted to be supporting Punchdrunk Enrichment in Against Captain’s Orders: A Journey into the Uncharted - an adventure on the high seas of maritime history at the National Maritime Museum from March 28th until August 31st.

In an exclusive first for the museum industry, the National Maritime Museum is collaborating with Punchdrunk Enrichment to take six to twelve year olds and their families on the adventure of a lifetime. Against Captain's Orders combines the National Maritime Museum's wealth of maritime history and artefacts with Punchdrunk Enrichment’s innovative practice and commitment to creating captivating, educational experiences.

The immersive theatrical experience will be further enhanced with Le Maitre’s four MVS haze units along with a G300 and Freezefog Pro atmospheric low smoke system. The haze units are positioned in four rooms throughout the show, with one haze unit and the low smoke system establishing the atmosphere of the opening scene in Port Greenwich (pictured).

Life jackets will be donned as visitors become part of the motley crew of HMS Adventure. Taking on seafaring roles of Ship’s Watch, Navigation, Midshipmen and Salvage, the teams will be called upon to navigate through this extraordinary exhibition.

Harnessing the heroics of Grace Darling, who launched a daring rescue mission of shipwrecked sailors, the intuition of Captain Bligh, who journeyed over 4,000 miles with the help of just a sextant and compass after being abandoned by his crew, and the intellect of Sir Francis Drake, one of the first men to circumnavigate the globe, audiences will live through their very own nautical adventure.

With so much history secured in one museum, so many doorways to other times and other worlds, Against Captain's Orders promises to be exciting, enlightening, and perhaps just a tiny bit dangerous.

Against Captain’s Orders: A Journey into the Uncharted is written by Simon Davies, directed by Peter Higgin and Katy Balfour and designed by Livi Vaughan. Sound and graphic design will be by Stephen Dobbie and lighting by Euan Maybank. Performances will be open to schools and family audiences. Adults attending must be accompanying a child between six to twelve years. Exhibition hashtag: #ayeaye

The National Maritime Museum holds the world’s largest maritime collection, housed in historic buildings forming part of the Maritime Greenwich World Heritage Site. The National Maritime Museum is part of Royal Museums Greenwich which also incorporates the Royal Observatory Greenwich, the 17th-century Queen’s House and Cutty Sark. Royal Museums Greenwich works to illustrate for everyone the importance of the sea, ships, time and the stars and their relationship with people. This unique collection of attractions welcomes over 2 million British and international visitors a year and is also a major centre of education and research. For more information visit www.rmg.co.uk.