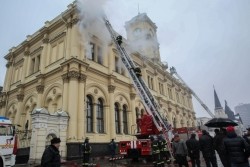 In the scenario faulty electric wiring led to a fire breaking out on the second floor of the building which quickly spread, causing high flames and dense smoke.

Fire & rescue vehicles, ambulances and the police all arrived quickly at the scene. Passengers and staff were evacuated, the 'burning' building was cordoned off, and the simulated fire was put out as fast as possible.

The successful exercise involved approximately 15 units, including fire tanks, pumping vehicles, aerial ladders, fire and rescue vehicles and a fire train, as well as extras to play the part of the injured.