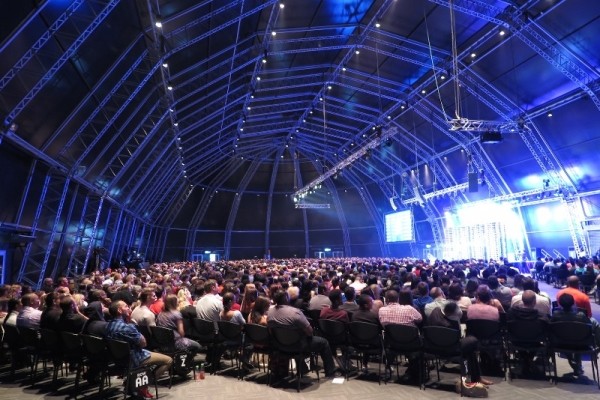 A new dome was erected on Krugersdorp hill, forming part of Tsogo Sun’s Silverstar Casino, based in Muldersdrift and another was erected at Tsogo Sun’s The Ridge in Emalahleni (Witbank), Mpumalanga.

The portable structure, was designed and built by In2Structures, and has been equipped with a lighting rig, stage and PA System making it a suitable self-sustained venue for smaller gigs hosted by Silverstar. It measure 71m x 35m x 17m high and has the ability to withstand large imposed loads such as suspended equipment and high wind pressure and importantly include exceptional safety factors.

DWR also installed a custom FOH in both venues. With the aim to create a nice look and feel, Robin 600 LEDWash fixtures and Robin 300 LEDWashes formed part of the spec. Control is with an Avolites Tiger Touch 2, with the DMX system running wireless on Lumen Radio. Each self-contained venue has a stage made up from Prolyte Stage decks. DWR also supplied personal protection equipment like harnesses, ropes and rigging.

Says Duncan Riley of DWR “There are a lack of venues in Johannesburg that can cater for events,” he said. “With the addition of the In2Structure Dome, Tsogo Sun now fills this gap and hopefully there will be more to come. It was an honour to be involved in this project as DWR Distribution.”