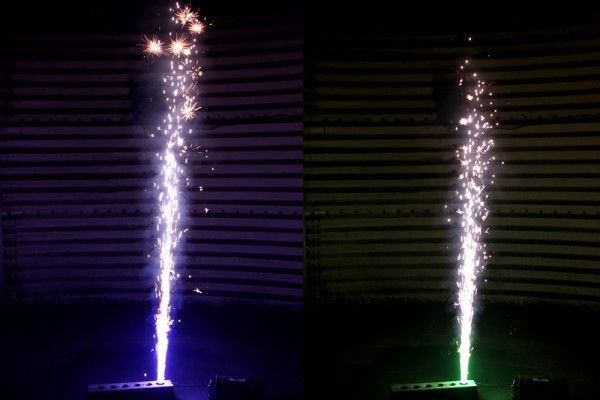 Le Maitre’s newly launched range of Coloured Ice Gerbs, include a spectacular and unique colour change version. A deeply coloured flame envelopes the base of the gerb and a column of silver sparks shoots up to heights of 6-8ft. The effects which last for some 20 seconds have been achieved by Le Maitre’s R&D team and are available in aqua, blue, green, orange, purple, red, yellow and pink or as a colour change version.

The Ice Gerbs are the latest in a number of great effects from Le Maitre and produced using their completely new production process which is greatly increasing factory production capabilities.

Other new products also just released by Le Maitre include:

New Large Intense Flames in blue, white, pink, yellow, red and green, which as the name implies produce an intense effect in terms of both colour and heat with flames 10-12ft high and lasting 20 seconds.

60ft Comets too are now available in an even wider selection of colours with and without titanium tail, as well as crackle, flitter and glitter versions.

Cannon Flash. Similar to the much loved Theatrical Flash Pyropot the Cannon Flash produces an even bigger flash with a deeper boom. It is also capped with a silver foil for waterproofing.

New Mortar Hits. These new style Mortar Hits are now available with loud report (PP820) as well as without (PP1049 - replacing PP512). The new Mortar Hits are very clean with no ash or cold fallout. The tube is black for improved concealment and it is also stronger.